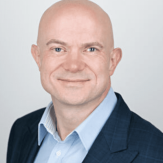 Awarded the title Britain’s Sales Trainer of the Year, and described by AstraZeneca’s Global Communication Director as “a genius, whose advice can’t be ignored”, Andy’s insights stem from the fact his Mother is blind. This has given him a lifetime’s experience of communicating from someone else’s point of view… so critical when seeking to persuade others.

His customers – who include some of the world’s largest and most famous companies – have won over £25billion as a direct result of working with him.

Andy’s three books are all international best-sellers. In fact, one was only kept off Amazon’s #1 spot by Harry Potter!

The UK’s largest sales conferences has invited Andy to speak at six of their annual conferences – the only speaker they’ve ever done this with.

Andy has spoken in 45+ countries, to audiences of all sizes. He has delivered keynotes at the Professional Speakers Association conference, as well as for blue-chip companies, Governments, professional bodies, and business experts.

His core belief is “it’s not what you say that counts. It’s what people do differently after you’ve said it”.